Here at Touch of Flair, we are a publication for the millennial; therefore, we love to feature millennial’s who have taken it upon themselves to accomplish great things.

Today we are introducing you to Collin, in the first part of a three-part interview with him. Collin is a helicopter and fixed wing pilot, currently attending university to earn his bachelor’s degree.

The path he has taken to reach these great accomplishments has been filled with hard work, humility and dedication. Collin has accumulated incredible experiences throughout these past two decades of life and he has kindly agreed to share some of his thoughts with us here at Touch of Flair.

Touch of Flair:  You have been flying for many years now; what was the start of your passion to become a pilot?

Collin:  To my earliest recollection, my interest in aviation began just like any other boy who witnessed airplanes flying and wanted to be a pilot. I was drawn to the typical boy interests and loved the idea of being a pilot, a police officer, or a firefighter. The reason I made the choice to pursue aviation was because of the Civil Air Patrol (CAP).

Touch of Flair:  So we know Civil Air Patrol is a civilian auxiliary unit of the US Air Force, created to assist with aerial surveying and rescue missions. How did you find out about their middle school and high school cadet program?

Collin: A friend in middle school was telling me about all the interesting facets of CAP and how they were set up as a civilian Air Force unit. The fact that they flew their own aircraft for missions grabbed my interest and gave me plenty of incentive to join. It was required that I attended three CAP meetings before signing up, so I could get the feel for the experience. After three meetings, I signed up and completed my first steps in the program. I then got to take my very first orientation flight in a Cessna 182.

“My face had a smile I could never lose.  The pilot let me take the controls and perform simple turning maneuvers, estimate the distances to airports and navigate using the sectional chart.”

I was so thrilled at the end of the flight, that when I came home I could not keep quiet.  All I wanted to talk about was my grand adventure! From that experience, I knew that my life had to be involved with aviation, no matter what.  CAP had all the information I needed on scholarships and contacts; it was at my fingertips. I was blessed by the opportunities there.

Touch of Flair: What was the next step? How did you pursue your goals to become a pilot from there?

Collin: Civil Air Patrol provided an opportunity to get connected with pilots and scholarships.  During one of the staff meetings for CAP, our commander was briefing us on the newest local scholarship available to cadets in Minden, Nevada.  The scholarship was to earn your private pilot license for glider aircraft (an airplane with no engine).  It covered all the expenses of the instructor and the fuel for the tow aircraft, all you had to pay for was a $10 tow fee.  Fortunately, I applied and I was the recipient of the scholarship! Because of that, I flew gliders for a year with the Minden Civil Air Patrol Squadron until I reached the point where it was time for the written exam. The Minden squadron was struggling to schedule flights due to a shortage in flight instructors, so getting lessons became difficult. I knew I wanted to fly more often and experience other kinds of aircraft, so I did some research. It was at that time I learned that if I got my pilot’s license in a glider, I would still need to retake tests for a powered, fixed wing aircraft pilot license. On the flip side, if I went and got my powered fixed wing license and then got the glider license, the test would be a lot simpler.  So, as the Minden squadron didn’t fly as much, I pursued my powered fixed wing pilot license.

Touch of Flair: How did you begin your private pilot training in fixed wing aircraft?

Collin: I grabbed flights whenever I could for the next two years; thanks to CAP and their occasional orientation flights in powered aircraft.

“I then took a job working in a donut shop and saving money until I could complete my flight training all at once.  I took as many ground school classes as I could find.”

Through those classes, I earned my endorsement saying I was smart enough to take the private pilot written exam for powered fixed wing. I passed on the first go with my highest score.  A couple of weeks later, I got a flight schedule set and completed the rest of my flight training in the month before I left for college.  I flew almost every day that month of July and got my private pilot’s license July 25, two weeks before I left for college.  To make my new-found license official I took my Mother, Father, and Brother up for a flight so I could show them my new skills before leaving for Southern Utah University (SUU).

Touch of Flair: What is it like flying fixed wing airplanes?

Collin: Flying in a powered aircraft is a joy.  With my experiences so far, getting your private pilot fixed wing license is like getting your driver’s license for a car; it’s so exciting and you absolutely have to show everyone what you can do with it.  You pile your friends in and go somewhere adventurous. The difference from the car is that the plane itself is the adventure and the destination doesn’t matter.

“Just getting to share the experience of flight with someone else for their first time is incredible.”

Out of all the aircraft categories, fixed wing is the most reasonable, as it is easy to get a retail aircraft in your area. I am blessed to have a rental aircraft here in Utah that is fairly cheap.  Since it is affordable, I love to fit as many friends as I can in the aircraft and go fly for an hour or so.  When you split the cost of the plane between 4 people the cost becomes reasonable for everyone! 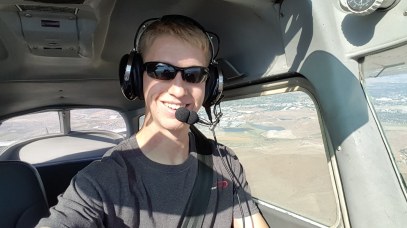 Touch of Flair: Tell us about your flights in Utah. What is it like taking up your friends?

Collin: When I fly with my friends, I like to demonstrate the feeling of flight through the basic maneuvers flight instructors teach students before we take our check rides. This includes, slow flights, stalls and steep turns. I coach each of my co-pilots on how to fly and what to do as we complete our flight plan.

“I have taken my friends to different cities for lunch and we get to fly over the Zion National Park and Cedar Breaks.  Utah is a beautiful place to fly.”

Here at Cedar City, all these breath-taking locations are within an hour flight there and back. Additionally, there are open valleys to perform maneuvers to show your passengers what positive and negative G’s feels like in the airplane.  When friends ask questions about what the training to become a pilot is like, instead of talking about it, I can demonstrate exactly what I did in my training while they fly with me.  I love taking new people up because they provide a great reminder to what my first flight was like. The ability to have that opportunity to give the gift of a new experience someone is a gift to me as well.

Collin: Aviation is something that is to be shared, not kept a secret. I get competitive in aviation when it comes to the job market. It is good when I slow down and enjoy flights by taking someone new flying. Showing friends the beauty of the experience encourages me to relax and to share it more.

“Now, I hate not having a seat filled in the airplane when I go flying; not because I’m looking to split the cost, but because I am not sharing with one of my friends the beauty of the sky and unveiling the secrets it holds.”

Make sure to catch part two of Collin’s interview next week as we find out more about his college experience and helicopter training!